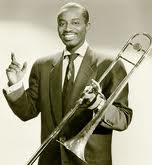 A bebop trombonist with deep roots in blues and popular song, Bennie Green developed a distinctive sound and style that was easily recognizable—no easy feat in a trombone landscape that was so dominated by his contemporary, J.J. Johnson.

Bennie's first recordings were with the Earl Hines Orchestra which he was with from 1942-1948, except for two years when Green was in the military. Before the end of the 1940s he was also on recordings with Wardell Gray, Charlie Ventura, James Moody, Charlie Parker, Coleman Hawkins, Miles Davis, Sonny Stitt, Bud Powell and Max Roach. In 1950 he did the first of several recordings with tenor saxophonist Gene Ammons, and in 1951 he recorded as a member of the Miles Davis Sextet with Sonny Rollins and Roy Haynes.

In 1970 he moved to Las Vegas, Nevada, and played in hotel show bands, with a few occasional recording sessions. The Biographical Encyclopedia of Jazz describes him as "One of the most dexterous and velvet-toned modern trombonists."