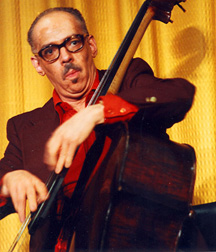 August 17th is the 100th anniversary of the birth of George Duvivier, one of the most in-demand bass players of all time!

Known primarily as a bassist, Duvivier was one of the top accompanists of the late swing and bebop eras, backing Coleman Hawkins, Bud Powell, and so many more. Later, he was steadily active in the New York recording studios, doing countless instrumental dates and recordings with singers from Frank Sinatra and Sarah Vaughan to Barry Manilow. George was invaluable in the studio as a bassist, always playing just the right bass lines with the right attitude. He occasionally would offer suggestions, when he felt it was necessary, that saved many a session from disaster. Duvivier was also a gifted composer and arranger who wrote for Jimmie Lunceford, Sy Oliver and others.