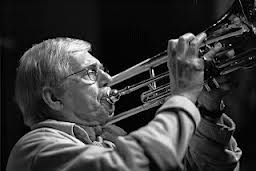 American jazz trombonist Robert Brookmeyer was one of the top valve trombonists and advanced arrangers of his time. Born in Kansas City, Missouri, he started as a pianist in dance bands, winning the Carl Busch Prize for Choral Composition during his attendance at Kansas City Conservatory of Music.

When he came to New York, he freelanced with musicians such as Coleman Hawkins, Pee Wee Russell, Ben Webster and Charles Mingus. He joined forces with Stan Getz for 15 years, but didn't gain widespread notability until a member of Gerry Mulligan's quartet in 1954.

He is marked as the creator of Gerry Mulligan's Concert Jazz Band, working with musicians throughout the decades including Bill Evans, Jimmy Guiffre, and his important quintet marriage with Clark Terry. He was an original member of the Thad Jones/Mel Lewis Orchestra and was a busy studio musician.

He was appointed Director of the BMI Jazz Composers Workshop. In 1991 he moved to Holland to start a new school for improvised and composed music. When he returned to the US, teaching jazz composition at the New England Conservatory of Music, he continued to write and record innovative, expressive works for jazz orchestra until his recent death in 2011.