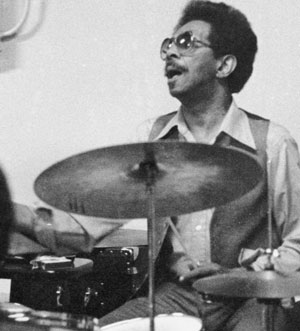 Born Joseph Rudolph Jones (July 15, 1923, in Philadelphia, PA), he dubbed himself "Philly Joe" to avoid confusion with the legendary drummer Jo Jones (also known as "Papa Jo" Jones). Unlike many jazz artists who started their careers by going on the road in their late teens, Philly Joe, at 18, joined the U.S. Army (1941) and remained in the Army until 1947. Soon after leaving the service, he moved to New York and joined Joe Morris's rhythm and blues band. His first recording (at age 25) was with the Morris band (September 19, 1948).

Looking at four of Joe's companions in that Morris band, it is obvious that these musicians had other musical goals in mind besides R&B: Johnny Griffin (tenor sax), Matthew Gee (trombone), Elmo Hope (piano) and Percy Heath (bass).

Philly Joe's first true jazz date (at age 29) was with Miles Davis (January 30, 1053). That session also featured Charlie Parker and Sonny Rollins, both on tenor saxes. From then, Philly Joe was off and running, reuniting with his Joe Morris rhythm section for further recording dates in 1953 with Lou Donaldson and Clifford Brown (June 9), then his first Tadd Dameron recording (June 11). On June 18, Elmo Hope used Philly Joe and Percy on his first record date as a leader.