This angular, open-ended song packs a lot into a short form. Solos are on a minor blues. A solo piano arrangement is available, as well as an exclusive duo recording (and video) by Geoffrey Keezer with then 15-year-old bassist Daryl Johns.

Premonition says a lot with a short form. The slow, laid-back swing tempo gives this song a subdued yet ominous feeling, especially with the long notes at the end of each melody phrase. Within only 18 measures, there are irregular phrase lengths, angular melody and bass figures, changes of feel and meter and unpredictable harmonies.

There are two sections to the head, which are interpreted slightly differently in each recording and arrangement. The opening three-measure melody phrase leads to four measures of walking swing in G minor—open for a piano solo fill. The second section of the head is divided into four-, three-, and four-measure phrases; the first two of these each begin with a measure of 3/4, and the last ends with a measure of 2/4. This final phrase has the same melody as the opening phrase but with different chords. The colorful chords move around mostly stepwise, and are resolved at the solos, which are over G minor blues changes.

Our lead sheets are based on this original recording. In this version the first rhythm section chord, on the "and" of beat 3 in the first measure, is tied over into the next measure; some other versions cut this note short on the downbeat. The middle phrase in the second section of the head is dramatically softer than the phrases before and after; the piano doubles the angular bass figure here. After the solos, the out head starts from the second section.

A solo piano arrangement is available; click on Piano Corner for more details.
Check out A New Joy for another song from "Diamond In The Rough," Roy Hargrove's debut album as a leader. Geoffrey Keezer had previously recorded with Roy on tenor saxophonist Ricky Ford's album "Hard Groovin'" in February 1989. "Diamond In The Rough" was Geoffrey's fifth studio recording, and Roy's sixth, already at ages 19 and 20 respectively.
Geoffrey's Solo Piano Arrangement has not yet been recorded. It's quite advanced and virtuosic, with lots of fills and wide-spread two-handed voicings. The chord on the "and" of beat three in the first measure is short—cut off on beat 1 of the next measure. This arrangement adds a new section after the head, based loosely on a chorus of minor blues but extended to 15 measures long—really a written-out solo. A couple of passages in this solo chorus are rather harmonically adventurous and are notated without chord symbols. In this version the out head starts at the beginning rather than the second section.

You can hear how Geoffrey plays this composition in the Piano/Bass Duo arrangement. See the third album cover, Geoffrey and bassist Daryl Johns.

James Spaulding recording this song in the key of C minor to feature the lower register of the bass flute—a rare and beautiful instrument. Our bass flute lead sheet is written in treble clef, an octave above where he plays it. In this version, the rhythm section hit on the "and" of beat 3 in the first measure is cut off at the downbeat of the second measure. The piano doesn't double the bass line in the second section of the head. After the solos, the out head returns to the top, rather than the second section as in the Roy Hargrove recording.

Since it's in a different key, only the bass flute lead sheet is available on this page. Click on the first album cover for all other lead sheets.
For more from this album, check out Donald Brown's Havana Days and Richard Wyands' Yes It Is, which feature James Spaulding on flute and alto sax, respectively. "Smile Of The Snake" is named for another Donald Brown song that Spaulding played on this album. 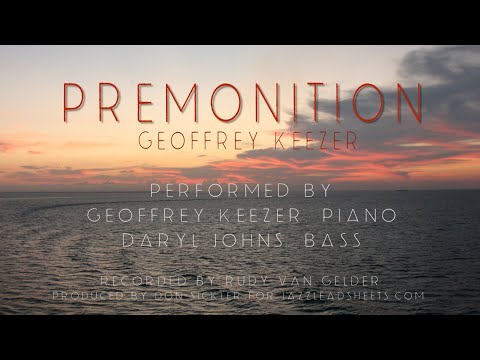 A condensed duo score is available for our exclusive recording by Geoffrey Keezer with bassist Daryl Johns. The melody is split between piano and bass. The first phrase begins with bass on the melody, answered by piano chords; in the fourth measure the piano takes over the melody with the bass in contrary motion. In the second section of the head, the bass and piano trade melody phrases.

As in the Roy Hargrove recording (left), the piano chord on the "and" of beat 3 in the first measure is held over into the next measure. The last measure of the head—2/4 in other versions—is here stretched out to 4/4.

You can see the duo performing at Rudy's in the video, and you can buy their audio track!

Lead sheets under this album cover are the same as the lead sheets under the Hargrove cover.
Check out the other Keezer songs from this duo session with Daryl Johns: Jackleg Patrol and Personal Space. As you can see from the album cover, they had a great time recording together!