This song from Keezer's second album as a leader is a challenging rhythm section workout, especially for the bass. We have an exclusive duo recording of Keezer with young bass star Daryl Johns, with a somewhat different arrangement; a transcription of the piano solo from this recording is available.

This song is a serious workout for the rhythm section, especially the bass. In much of the head, the bass line is busier than the melody; there is no walking bass in the head. It's an angular song, with no key center and many unconventional harmonies, particularly slash chords. The A section begins alternating two measures each of Dmaj7#5 and Dbmaj7#5, returning to the first chord for two measures followed by four measures of slash chords—mostly triads over roots a whole step higher, but ending on E♭/A♭. The slower melody floats over the rhythmic bass line at first, but the last four measures of the A section have a more active melody and simpler bass figures. A rhythmic bass figure again kicks off the B section, which starts rhythmically simple but harmonically complex with shifting double triads over a static F pedal. This is broken up in the fifth measure of this eight-measure section by a neat little contrary motion lick, with stepwise rising dominant chords over roots that fall in thirds to a D♭ pedal with more shifting double triads.

The following C section is also eight measures, and introduces some angular triplet bass figures answered by simple melody phrases on overlaid Gmaj7 and Amaj7 chords. Then there's a six-measure D section whose melody suggests a D♭ major tonality, but is harmonized in mostly root position maj7♯5 chords coming to rest on F7/G♭. The final E section of the head is the same as A.

The bass finally walks on the solos, which keep the ten-measure A section form from the head. The slash chords at the end of this section are changed to sus chords on the roots, resolving to E♭maj7 instead of E♭/A♭. One chord is held on the first six measures of this section: F♯7 with a natural and sharp 5th. (Don't be confused by this natural—these two chord tones are C♯ and D, not C and C♯.) It's essentially an inversion of Dmaj7♯5, and comes from the B melodic minor scale. The rest of the solo form is a new eight-measure bridge with more II-V7-based harmonies, followed by eight measures of G7/D♭.

There is an intro which is one A section long, featuring the same bass line from the A section but developed into a more complex figure in the seventh and eighth measures. The coda again vamps on the same F♯7 tonality from the solos, with the last four measures of the intro on cue at the end.

On this recording, the bass line is doubled by the piano. Our Concert Condensed Score is the rhythm section part for this arrangement. On the recording the vibes have two-note harmonies on the B section, which are notated in this score. A solo piano arrangement is available; click on Piano Corner for more details.
Geoffrey Keezer was only 18 when he recorded "Curveball"—already his second album as a leader! Steve Nelson had also played on Geoff's debut album "Waiting In The Wings" in the previous year. Nelson later played on three more Keezer albums: "Here And Now" (1990), "Other Spheres" (1992), and the live album "Trio" from 1993 (with Neil Swainson on bass). One week after the "Curveball" session, Keezer played on an all-star recording honoring Phineas Newborn, Jr., who had died two months earlier; this album, titled "Four Pianos For Phineas", featured Keezer, James Williams, Harold Mabern and Mulgrew Miller each in a trio setting with bassist Bob Cranshaw and drummer Billy Higgins.
Geoffrey's Solo Piano Arrangement is available, which is very close to what Geoff actually played on the recording. The bass line is all there, as well as the voicings for all the complex harmonies. On the B section, the middle pedal must be used to sustain the pedal point while the chords shift on top; pedal markings are clearly indicated. The triplet bass line in the C section is slightly simplified, being only in the left hand; on the recording Geoff plays it with both hands two octaves apart. 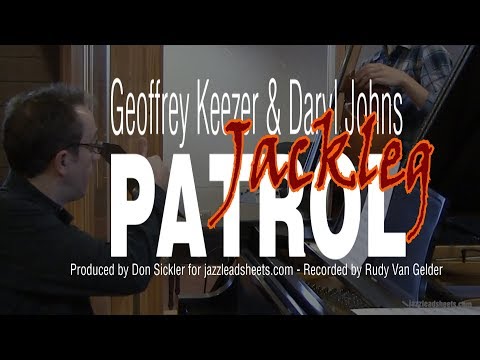 This duo version is slower and funkier than the original recording. The arrangement is a little more of a bass feature: the bass has the line on the A section alone, not doubled by the piano. In the intro the piano only doubles the bass line on the last four measures; the C section bass line is also doubled. The form is rather different as well. Solos use a funky 2-feel instead of a 4-feel. The solo form is only 16 measures, corresponding to the first section (F) of the original recording's solo form: 12 measures of the F♯7 vamp followed by the more active changes of the last four measures.

Between the piano and bass solos, some of the head is played as an interlude: the B and C sections and the first four measures of the D section, which go straight into the same solo form for the bass. The out head is taken from B, with no vamp for the coda but instead two more chords continuing the last phrase of the head. Because both the interlude and out head start on B, our parts indicate D.S. after each solo; "to Bass solo" is written at the fourth measure of the D section.

A bass part is available. We also have a transcription of Geoffrey's piano solo; click on the Solos tab for more details.
When Don Sickler met Daryl Johns at the 2009 Thelonious Monk International Bass Competition, he saw great possibilities in the young man. Only 13 years old at the time, Daryl so impressed the judges that he got special mention. Don envisioned a series of bass-feature recordings, with Daryl alongside some of Don's Second Floor Music pianist/composers. With the recording expertise of Rudy Van Gelder, over the next few years eight sessions were completed. Check out our Piano/Bass Duos.
Geoffrey plays three 16-measure choruses. His first chorus [clip] is relatively simple and sparse in both the first and last four measures, but the middle of the chorus contains two triplet patterns that extend for three measures each. The one starting in the sixth measure rises and falls in the right hand only, while another in the tenth measure is entirely descending and two-handed. Two more largely descending triplet sequences take up most of the second chorus. His third chorus has more varied and swinging rhythms. The scale he uses on the vamp is definitely the fifth mode of B melodic minor, with G♯ instead of a perhaps more expected G natural.