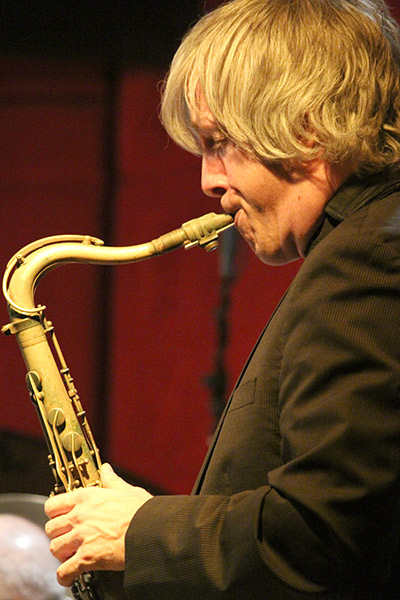 A swinging tenor saxophonist, Grant Stewart is a powerful, expressive stylist in today's jazz scene. Born in Toronto, Stewart's early exposure to giants like Charlie Parker and Coleman Hawkins came from his father, an English teacher and semi-professional guitarist. By the age of 14 Grant was so advanced on the alto saxophone that he began playing professionally in the Pete Schofield Big Band. At 17, he made the switch to tenor and starting playing with some of his greatest influences in the Toronto jazz scene, Pat LaBarbera and Bob Mover. (He still does play alto saxophone to this day, but his love of artists like John Coltrane and Sonny Rollins encouraged him to make tenor his primary instrument.)

Upon moving to New York at the age of 19 he began studying and performing with masters Donald Byrd, Barry Harris and Joe Lovano. Stewart's talents have not gone unnoticed: throughout his career, he has played with many of the biggest names in modern jazz, including Clark Terry, Etta Jones, Bill Charlap, Curtis Fuller, Jon Hendricks, Brad Mehldau, Jimmy Cobb, Harry Connick Jr., Mickey Roker, Dick Hyman and Russell Malone. He was also a member of the last Al Grey Sextet. His success has also spread internationally with tours throughout North America, Europe, Japan, Brazil, and Taiwan. He was part of the first musicians to play at the historic Hermitage Museum in St. Petersburg, Russia, and has been a featured artist at the Guggenheim Museum's Jazz series alongside drummer Jimmy Cobb. He has released twelve recordings as a leader that feature his own compositions, hardbop classics like the works of Hank Mobley and Sonny Rollins, and more traditional jazz titles such as those written by Duke Ellington and Billy Strayhorn. Grant is a master across jazz genres. Follow Grant Stewart's latest news at his website.