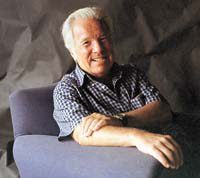 Sergio Mihanovich was a beloved composer in his native Buenos Aires. In Argentina, Sergio was active in many areas: writing soundtracks for Argentine films and theatrical productions; working in nightclubs; recording in both jazz (performing and recording with saxophonist Gato Barbieri) and pop settings; as an educator; and as a writer of both music and words. In the 1960s Sergio lived in the United States for a time, writing the songs that eventually became part of the Second Floor Music catalog and working as a pianist/vocalist/composer.

His best-known work is Sometime Ago, which has been recorded instrumentally by Cannonball Adderley, Bill Evans, Art Farmer, Stan Getz, Joe Pass, George Shearing, Clark Terry & Bob Brookmeyer and numerous others. The vocal version has been recorded by singers Irene Kral, Mark Murphy, Judy Niemack and others. Sometime Ago found its way to the United States by way of guitarist Jim Hall, who discovered it when playing with Gato Barbieri in Argentina in 1960. Jim fell in love with the song and brought it to Art Farmer, who popularized it. It has since become something of a standard, though few know the story of the man who wrote it.