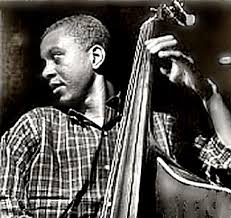 An extraordinarily prolific bassist with a tragically short life, Detroit jazzman Doug Watkins was known for his sublime tone and unique phrasing. Doug cut his teeth on the Detroit jazz scene, where he was very much in-demand. He left to tour with James Moody in 1953, then returned to play with the Barry Harris Trio. In 1954, Doug settled in New York, where he continued to be a popular choice for recording sessions, especially when his closest friend (often mistaken for a cousin) Paul Chambers was unavailable.

He was a member of the original Jazz Messengers from 1955-1956, which he left to join the Horace Silver Quintet. He went on to freelance with some of the biggest names in hard bop for the Prestige label: Sonny Rollins, Jackie McLean, Donald Byrd, Lee Morgan, Gene Ammons, Art Farmer, Kenny Burrell, Phil Woods, and Hank Mobley, among many others. Doug only recorded two albums as a leader: “Watkins At Large” (1956) for Transition, joined by other members of the Horace Silver Quintet, which was followed by “Soulnik” in 1961 with Yusef Lateef, for which Doug played cello—an instrument he incredibly picked up only two days before the session. Tragically, Doug died in a car accident only a year later at the age of 27, yet over the course of his lifetime appeared on over 350 recordings. Perhaps the best endorsement for Doug’s skills as a bassist: when Mingus briefly took up the piano in 1961, it was Doug whom he chose to take over for him on bass.