A lyrical 3/4 song in Kenny Drew, Jr.'s signature style, with a long form and intricate changes. 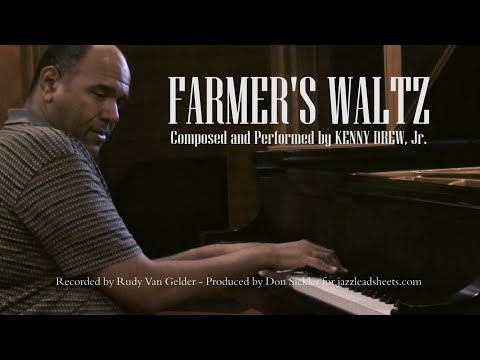 A gentle, lyrical 3/4 song with a long form and intricate harmonies. The form is 52 measures long with no repeated sections, each section eight measures except B and E which are six measures. There is no single key center, so our lead sheets have no key signature. The melody connects the various tonalities very smoothly.

The A section is essentially in D major, with some colorful maj7♯5 chord qualities. The B section melody starts the same as A but a half step higher; however, the changes don't imply E♭ major here but descend stepwise toward the next section. This harmonic descent continues all through the C and D sections (essentially the "bridge"). At C the changes alternate between Gm7 and F♯7, and then F7 and E7; the D section has shifting triads over pedals which go down in whole steps to A to resolve back to D. The E section begins like A, but with melody and harmony rising in the fifth and sixth measures to resolve to A major in the next section. The F and G sections, which have almost the same melody (related to the C section), establish an A major tonality.

On the recording there is an eight-measure intro which repeats a chord cycle similar to the start of the A section (essentially a "Tadd Dameron" turnaround). On the out head the F section is repeated as a vamp, with the melody played twice followed by guitar and piano trading. After the trading, F is played twice again ending on Amaj7; this could also fade out.

Kenny plays the A and B section melody on the recording, with guitarist Larry Coryell comping; Larry doubles the piano melody on C and D in unison. E again has piano melody alone; the guitar doubles the piano an octave lower starting on the third measure of F, going into unison (in harmonics) in the last phrase of the G section.
A composition first captured by the legendary engineer Rudy Van Gelder, when Kenny Drew, Jr., performed the piece on a Second Floor Music/jazzleadsheets.com session.

For more from this album, check out Goodbye, Mr. Jones and A Silent War; all three also have videos of Kenny playing solo piano Kenny Drew Jr. at Van Gelder's.