A tribute to Thelonious Monk's Rhythm-A-Ning that takes the classic theme into new directions. Billy Higgins drum transcription available, plus a Solo Piano Arrangement, parts for two tenors, and a new quintet arrangement.

Although Dexter never recorded with Thelonious Monk, he loved Monk's music. Our discographical research shows Dexter recorded Monk's Rhythm-A-Ning eight times. For a tribute to his young son (Benjamin, born in 1975), Dexter develops the opening major triad statement of this Monk classic into his own Monkish composition, giving room in his bridge for Tete to add his own Monk-like fills.

Solos are on "rhythm changes."

A tenor sax second part is also available in the key of B♭ (Dexter's original key), as well as alternate second parts. This is ideal for a quintet with two tenors, a setting Dexter always loved. Of course, it can also be used with alto sax or guitar playing the melody (from our lead sheet) as the first part.

Benji is Dexter's son, born in Copenhagen six months before this session.

After a tour of England and the Continent in the fall of 1962, Dexter settled in Copenhagen, Denmark. He didn't start recording for the Steeplechase label until July of 1973, when he recorded with Jackie McLean live at the Jazzhus Montmartre (where they recorded Sunset by Kenny Drew). Dexter did his last New York recording for Prestige Records in June of 1972. Then he started recording for European labels, doing a series of recordings for Steeplechase between May 1974 and November 1976. Dexter recorded Benji's Bounce on the second day of two consecutive sessions for Steeplechase, replacing guitar with pianist Tete Montoliu for the second day. This recording features two European musicians, Montoliu (Spain), and Neils-Henning Orsted Pedersen (Denmark), alongside Higgins.

Solo Piano Arrangement: Don Sickler's "easy" arrangement for solo piano is available. As Don, a trumpet player and arranger, is fond of saying, "If I can play it, it's not that hard."
A seven-page in-depth drum transcription of Billy Higgins drum on Dexter Gordon's Benji's Bounce (our audio clip starts at the exchanges)
-- eight-bar drum set up
-- melody is shown above the drum staff
-- everything Higgins plays behind the in melody
-- drum solo trading 8s, 4s and 2s with Dexter Gordon
-- everything Higgins plays behind the out melody

This transcription includes a lot of Billy Higgins solo material. Though mostly known for his signature "groove" on many classic Blue Note albums, Higgins' soloing is not to be overlooked. It is tasty, always grooving, and very much unique to his style.

The musical relationship between Billy and Dexter is evident throughout the track, but their interaction in the trading section is very special. 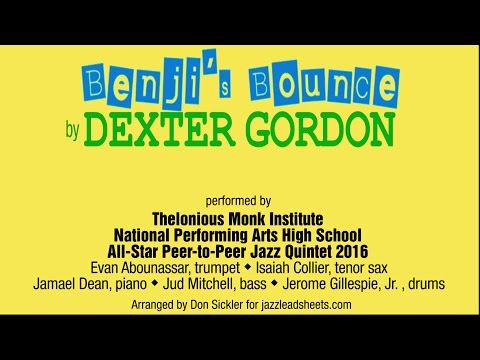 We now have a quintet arrangement available, with two-horn voicings throughout. The original key of B♭ is not ideal for trumpet, so jazzleadsheets.com's Don Sickler created this arrangement in the key of F. The voicings reinforce this head's Monkish vibe, with major seconds beginning each chord of the A section—for example the tonic F at the beginning of the melody is harmonized with E♭. The four phrases of the bridge are harmonized mostly in thirds, but with a major second at the end.

A minus-melody (no horns) MP3 is available at no charge, plus the mix of the session.

Rhythm section players should get the Condensed Score.
Don Sickler has been the artistic director for the Thelonious Monk Institute's International Jazz Competition for many years, so he's developed close ties with those in charge of running the Institute's jazz outreach programs. J.B. Dyas, Vice President of Education and Curriculum Development, felt he had a particularly good ensemble in 2016, so they stopped by jazzleadsheets.com and Rudy Van Gelder's studio at the end of their 2016 tour to document their progress. We videotaped their rehearsal at the jazzleadsheets.com studio, and Rudy recorded their performance at his studio in Englewood Cliffs, NJ. 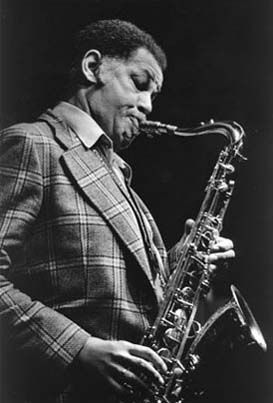 Tenor saxophonist Dexter Gordon was born in Los Angeles, CA. In his last year of high school, he received a call from alto saxophonist Marshall Royal asking him to join the Lionel Hampton big band. This led to Dexter's first recording, with the Hampton band, on December 21, 1941. In 1944, after a few weeks with the Fletcher Henderson Orchestra and working and recording with Louis Armstrong's orchestra, Dexter joined Billy Eckstine and recorded with Eckstine's legendary band of soon-to-be jazz superstars that included Dizzy Gillespie, Sonny Stitt, Gene Ammons, Leo Parker, Art Blakey, Sarah Vaughan, arranger Tadd Dameron and others, on September 5, 1944. Read more...