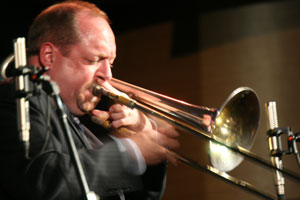 Steve Davis is widely regarded as one of today's leading improvisers on the trombone. His lyrical, hard-swinging style first gained him broad recognition during the 1990s while working with the bands of jazz legends Art Blakey, Jackie McLean, Chick Corea's Origin and the cooperative sextet, One For All. Steve also followed in his mentor Curtis Fuller's footsteps by joining saxophone legend Benny Golson and The New Jazztet in 2008.

Born in Worcester, MA, in 1967, Steve graduated in 1989 from The Hartt School's Jackie McLean Institute (University of Hartford, CT). It was McLean's guidance and recommendation that helped Davis land his first major gig with Art Blakey in NYC in December 1989. Steve returned to Hartford in 1992 to join McLean's sextet and began teaching alongside his mentor at both the Hartt School and the Artists Collective.

Steve continues to perform and record with the well-known collective unit One For All, which also features Eric Alexander, Jim Rotondi, David Hazeltine, John Webber and Joe Farnsworth. As of 2009, One For All has recorded 12 CDs since 1997. Second Floor Music has published combo arrangements (full scores and parts) for many songs in the One For All repertoire including two sextet series of complete sets: Optimism and Too Soon To Tell.

In demand as a sideman, Davis is featured on over 100 recordings. In recent years, "Stevie-D" (a nickname given to him by the late Jackie McLean) has worked regularly with a broad range of jazz icons including Larry Willis' Quintet, Freddie Hubbard and The New Jazz Composers Octet, Slide Hampton and The Dizzy Gillespie Alumni All-Star Big Band (featuring James Moody, Jimmy Heath and Roy Hargrove), The Jimmy Heath Big Band, Cecil Payne, Horace Silver and Wynton Marsalis' Lincoln Center Jazz Orchestra.