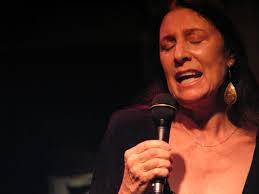 Multidimensional artist Meredith d’Ambrosio is often heralded as a modern renaissance woman. Although she is best known as a jazz vocalist, Meredith is also a successful composer, pianist, lyricist, and painter. Critics describe her vocal style as soft-toned, pure, interpretive, and warm, in a tradition that follows Blossom Dearie and precedes Diana Krall. Raised in a musical family, Meredith studied painting and music from an early age. She was invited to open for John Coltrane in 1966 but turned him down. It was not until nearly a decade later that she made her recording debut with her husband, Eddie Higgins.

Since then, she has recorded steadily on Sunnyside and released collaborations with Lee Konitz, Fred Hersch, Jay Leonhart, Don Sickler, among others. She has toured and performed nationally and internationally alongside artists like Hank Jones, Bob Dorough, Richard Wyands, Milt Hinton, Buddy DeFranco, Phil Woods, Al Grey, Rufus Reid, and many more.