A ballad that morphs into a light swing, demonstrating wonderful variety in performance.

Meredith hears this song as either medium swing or as a ballad as the lead sheet indicates. She feels strongly that the singer should have rhythmic freedom in interpreting her songs, so she often notates her melodies very simply. The vocal lead sheet presents the song as Meredith wrote it, but she encourages singers to experiment with their own phrasing. This piece features a beautiful and unusual chord progression that shapes a simple, understated melody. It's perfect for the singer who is looking to branch out from overdone jazz standards!

Meredith's own recorded version of Miracle Of Spring opens as a ballad for one chorus, changing to a medium swing for a second chorus of the melody. Our audio excerpt starts two measures before the second chorus, just as the song changes from a ballad to medium swing. The recording also features both a bass and piano solo, which last respectively for one chorus each. Meredith then returns with the second half of the melody, and the recording closes as the rhythm section plays a chordal ending.

Lyric Description: In this optimistic lyric, Meredith describes waiting through the autumn and winter not only for the beautiful spring, but also for the love that she is sure will come with the season's turning. The interpreter of this lyric is left to wonder whether spring heralds love, or love heralds spring.

No-vocal version: Don Sickler: "The accompaniment-only version starts with the same instrumental intro as Meredith's recording. Meredith sang in an isolation booth for this recording, so we're able to take her vocal out and give you the chance to sing with the band. As a trumpet player backing a singer, I'm always careful not to step on the vocalist. We left the trumpet fills in between the melody phrases for you. Instead of a trumpet solo, as was next on Meredith's recording, we've left one chorus open for you to either scat or vocalize a solo. This leads into the last melody chorus which goes to the coda. Instead of fading, like Meredith's recording, this version vamps into an ending, providing a longer opportunity for improvisation before ending."

If another key would be better for you, send the key you'd like to Don and we'll post the transposition on the website for purchase. If you're not sure which key is best, send us your range and we'll work with you to figure out the best key.

This 2004 recording was made at Rudy Van Gelder's Englewood Cliffs, NJ, studio, where so many great recordings have been captured. Arrangements by Don Sickler. Check out other wonderful compositions on Meredith's "Wishing On The Moon" album.
Vocal Transcription: Check out Meredith's vocal transcription to investigate the interesting ways she varies her phrases. Comparing the lead sheet and the vocal transcription will give you insight into the style and technique of this great artist, composer and lyricist, encouraging you to be creative and exploratory in your own interpretation.

Email Send Miracle Of Spring to a friend 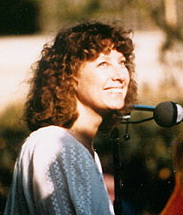 The Boston-born daughter of two professional musicians, Meredith d'Ambrosio far surpasses the layman's use of the term "renaissance woman." Known not only for her musical endeavors, d'Ambrosio is also a visual artist of recognition—an indication of versatility that has undoubtedly added dimension and beauty to all of her endeavors. It's been said of Meredith that she is an artist whose original songs, as well as her lyrics to other composers' music, always have a deep ring of truth. Read more...