A medium swinger with a classic modern post-bop sound, this song has an active rhythm section part and plenty of dynamic contrast. In addition to the original 1993 recording, there is a video of this song from 2017—a great opportunity to see how this song evolved over the years. 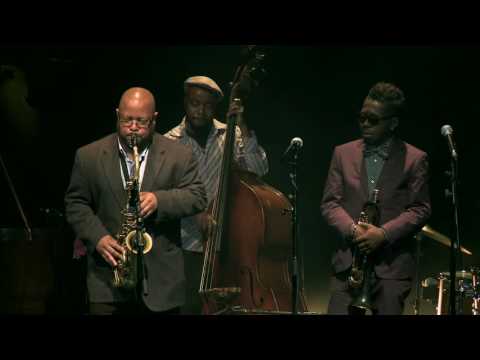 This song has a strong sense of direction, in terms of both melody and harmony. The A section starts high and generally descends, while the B section starts low and at first ascends. The form is 40-measure AABBC, with C the same as A. The melody is relatively simple in a classic post-bop vein. There is no key center; the changes begin with a tonal-sounding descent from A♭ to G♭ tonalities, but then become more angular with a less-predictable downward motion. A lot of phrases end on maj7(♯11) chords. At the bridge the changes rise, with sus chord qualities, and fall with the melody.

The head is full of rhythm section figures that complement the melody, with a rhythmic bass line at the bridge that fills in the longer melody notes. The bass doubles the melody on triplet figures in the fourth measure of A and the fifth measure of B. The rhythm in the fourth measure of A includes a quarter-note triplet starting on beat 2; this goes across the third beat. This rhythm may be unfamiliar but it's no trickier than typical quarter-note triplets—just on a different beat than usual. The rhythm section goes to a 4-feel for the solos.

On this recording, there's a lot of dynamic contrast. The contour of the dynamics is essentially the opposite of Roy's earlier song Depth: starting louder, the third measure suddenly becomes softer, and the bridge begins softly.

Second parts are available for the two-horn arrangement; the horns are in octaves in the beginning, but in the third measure they are harmonized in thirds, and for the rest of the A section in fourths. On the bridge the horns begin in thirds, going to unison in the fifth measure; the last note of the bridge is in fourths again.

Video notes: A video is available of a much more recent version of Homelife Revisited, with Roy's last band in 2017. This version is much faster, and the horns are in unison throughout the head.
Don Sickler: "When Roy re-introduced this song back into his last band's repertory (see 2017 video above), he made some fundamental changes:
1) First, he used one of my favorite live gig devices: No count off necessary. Roy just plays the opening five measure phrase, setting up the rest of the band's entrance. The piano actually enters on the fourth measure and everything gets solidified in the sixth measure. As you'll also notice, the band has no music on the stand. Therefore, this type of start allows Roy the flexibility of putting the piece anywhere in the set, by just starting it himself.
2] Roy is using a light hip-hop groove to go in and out of what was before a stop-and-go swing head in the original 1993 recording.
3) The first three measures of the A and C melody are an octave lower.
4) The dynamic level of the melody has changed from the shifting loud-soft contrast of the original. It is now a more consistent mezzo forte."
"Of Kindred Souls" is a live album, recorded at several concerts in various locations in California and the midwest. It's Ron Blake's first recording; his second was Art Farmer's "The Company I Keep," followed by two more with Hargrove: "With The Tenors Of Our Time", and pianist Marc Cary's "Cary On." Two of the songs on "Of Kindred Souls" have guest appearances from Andre Hayward on trombone and Gary Bartz on alto sax.

Roy Hargrove was a pioneer in modern hard-bop jazz and is widely regarded as one of the best trumpeters to emerge from the 1990s. As a high school student in Waco, Texas, young Roy met Wynton Marsalis in 1987. Impressed with the young man's talent, Wynton encouraged Roy. In April, 1988, while still a teenager, Roy traveled to NYC and slept on the couch in Don Sickler's rehearsal studio in preparation for his recording debut in the big leagues with Don ("Superblue"). Before leaving New York on that trip he also recorded with alto saxophonist Bobby Watson ("No Question About It"). Read more...