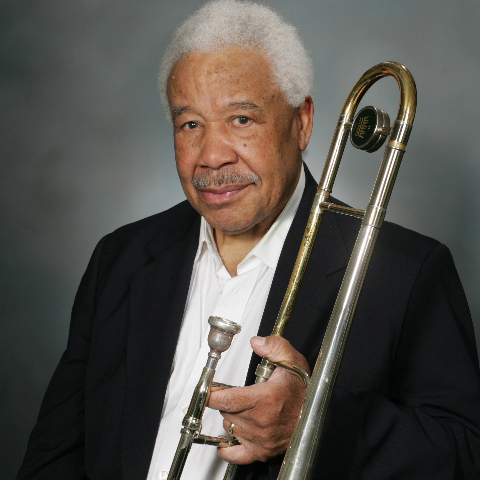 Born and raised in Baltimore, Maryland, trombonist and arranger/composer Tom McIntosh studied voice at the Peabody Conservatory in 1944. In 1950 he was stationed in Germany with an Army band, where he first encountered reedman James Moody, who was touring Europe with Coleman Hawkins. Nine years later, after graduating from the Juillard School in NYC, Mac was hired by Moody to play in his sextet. The sextet became a septet for the first Moody recording, simply titled "James Moody," recorded in Chicago in August, 1959, for the Argo label. This album also contained Tom's first recorded composition With Malice Toward None, which Tom arranged as well.

Four months later, on December 29, 1959, Tom went back in the studio to arrange and conduct the album "Hey, It's James Moody," which included three more McIntosh compositions. Two months later (February 23, 1960) Tom arranged and played trombone on Milt Jackson's "Vibrations" album, which also contains two McIntosh originals, including a clever retitling of his first recorded composition, Mallets Toward None. Before the end of that year, Tom had joined the Art Farmer/Benny Golson Jazzet. By 1961, the word was definitely out that McIntosh was a gifted composer and other artists started recording his compositions. On January 30, 1962, Moody recorded five more McIntosh compositions, including the first recording of the McIntosh classic Cup Bearers, which Dizzy Gillespie recorded the next year, along with two other McIntosh compositions.