Hazeltine's tribute to Bill Evans is a delicate 3/4 song with no key center and an almost classical sound. A solo piano arrangement is available based on the recording. 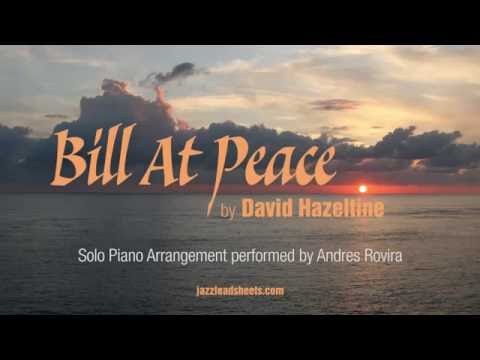 This subtle, subdued 3/4 song has no key center. Like several other Hazeltine compositions, the harmonies flow evenly with no striking contrasts, but many tonalities are visited or implied without being established for long. At times this song has a classical, impressionistic sound, particularly at the start of the B section where a descending line over a pedal point recalls Forlane from Maurice Ravel's piano suite "Le Tombeau De Couperin." The 48-measure form is divided into 16-measure A, 12-measure B, and 20-measure C sections. The A section melody develops a mostly rising four-measure phrase through a few transpositions, while the melody of the B section descends over pedal points first on F♯ and then on B. The C section is more varied melodically, but returns to a development of the opening phrase toward the end.

The solo changes are a variation of the head changes, with more II-V7 motion in the A section and no pedal point at the B section. The coda begins with the last eight measures of the form, with a variation of the melody there leading into a rising development of the opening phrase. The final chord is E minor, which is also the first chord of the form; Hazeltine's fill from the recording, on the second to last measure, is shown in the lead sheets. This fill is also similar to a phrase from Ravel's Forlane.

On the recording, Hazeltine plays the C section rubato as an intro, before going to the A section melody in time. Our lead sheets show a few important countermelodies that Hazeltine plays.

David's solo piano arrangement is available; click on Piano Corner for more details, and see pianist Andres Rovira playing it in the jazzleadsheets.com studio, above.
Bill At Peace is the only Hazeltine original on the album "Waltz For Debby," which otherwise consists of Bill Evans songs. On some of the album Hazeltine is joined by George Mraz on bass and Billy Drummond on drums. "Waltz For Debby" was Hazeltine's sixth album as a leader, and only his second trio album. The same trio appeared on Hazeltine's 2003 album "Alice In Wonderland" and his 2005 Bud Powell tribute album "Cleopatra's Dream," as well as "Manhattan," a live album from later in 2005.
David wrote this Solo Piano Arrangement at the request of Don Sickler, who wanted to make it available. As performed. the longer notes of the melody are sometimes played in two-handed voicings, but often the chord voicing fills in the melody rhythmically by starting on the "and" of beat 1. The coda in this solo arrangement starts with the rising "tag" phrase, without the variation on the last eight measures of the head as in the lead sheet.

Email Send Bill At Peace to a friend

Heralded by pianist Cedar Walton as the "brightest star on jazz piano's horizon," David Hazeltine is considered to be one of jazz's premier pianists as well as composer-arrangers. With a mantra to "swing as much as humanly possible," David's style is infused with influences of Art Tatum, Bud Powell, Buddy Montgomery, Barry Harris and Cedar Walton while still retaining his own fiercely individual voice. Hailing from Milwaukee, David made his professional debut on the organ when he was just thirteen years old. Read more...