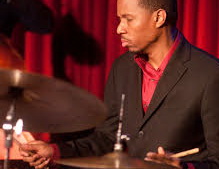 Jones' sharp time-keeping and distinctive rhythmic expression are part of what make him one of the world's leading jazz drummers today. Willie Jones III's interest in jazz started at a young age when his father, a notable jazz pianist, introduced him to jazz music. After playing in his school marching band and jazz ensembles, Jones received a full scholarship to California Institute of the Arts, where he studied with James Newton and Albert "Tootie" Heath.

Soon after, he started sitting in at jam sessions at the World Stage, where he met drummer and World Stage founder, Billy Higgins. Higgins became a mentor for Jones and quickly started having Jones fill in at his gigs.

In 1991, Jones co-founded the band Black Note, which won the John Coltrane Young Artist Competition with its hard-swing sound. In 1994 the group toured Europe and the U.S. and was also the opening act for Wynton Marsalis. Two years earlier, Jones had been a semifinalist in the 1992 Thelonious Monk Jazz Competition.

Within the first week of moving to New York, he started working at Blue Note with Arturo Sandoval, with whom he played from 1995 through 1998. Jones can be heard on Sandoval's Grammy award winning "Hot House" album. From 1998-2005, Jones played in Roy Hargrove's Quintet, and can be heard on "Distractions," an album by the RH Factor. Jones also played on Grammy nominated "Night Moves," with Kurt Elling.