A minor blues driven by a funky Latin groove, this song became an important part of Roy Hargrove's repertoire. Videos of two performances from the late '90s show how this song changed over the years. 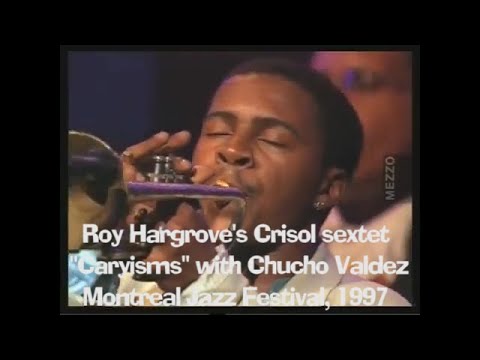 With its funky, double-time-feel melody that leaves plenty of space for the rhythm section to groove, this minor blues is a Roy Hargrove classic. Our lead sheet is based on the recording, but as Roy performed this song over the years, the melody and groove changed quite a bit from the original version. Check out the two videos from 1997 and '98 to see how the song evolved.

The melody begins in the Dorian mode for both the I and IV chords, highlighting the major 6th; the last four measures switch to B♭ blues scale. The last chord is C♭maj7 (Bmaj7) instead of the expected B♭ minor. There is an intro that repeats a simple four-measure figure four times, all over C♭maj7; this chord is also vamped and faded out at the end. Our audio excerpt starts at the beginning of the track with the intro and goes through the first chorus of the melody.

The basic bass line is indicated under the staff, with a few of bassist Rodney Whitaker's driving grace notes which imply a double-time feel—as the melody does, more so on the head than the intro. The 9th and 10th measures have rhythm section hits, leading to a tumbao-like bass line (still double-time feel) in the last two measures.

Our lead sheets indicate the style as being Latin, without indicating any specific type of Latin groove. This recording has two different rhythmic elements that drummer Greg Hutchinson plays to propel the music forward. On the intro he uses a steady quarter note cross stick pulse. For the head he switches the pattern to a back beat (cross stick on 2 & 4), driving the double time feel of the melody.

This recording has an unusual solo form, with each solo modulating to a different key after the first chorus. Alto saxophonist Antonio Hart starts with a chorus in B♭ minor, going to D minor for his next two choruses; Roy Hargrove starts in D minor and then plays two choruses in C minor, and pianist Marc Cary continues in C minor and finishes in F minor. Later performances do not include the key changes.
Don Sickler: Roy wrote Caryisms with pianist Marc Cary in mind. Just recently Marc recorded at our Van Gelder Recording Studio. It was great to see, hear, and talk to him at the session. We hadn't seen each other in years. Marc also recorded on Roy's 1993 "Of Kindred Souls" album, which includes Roy's compositions The Left Side and Homelife Revisited. In 1994, Marc recorded Roy's The Trial, with Roy, on his debut album as a leader, "Cary On." Their last recording together was in 2000 where Roy was one of three singers on Marc's "Rhodes Ahead, Vol. 1" album.

See all jazzleadsheets.com titles on "The Vibe."

Email Send Caryisms to a friend

Roy Hargrove was a pioneer in modern hard-bop jazz and is widely regarded as one of the best trumpeters to emerge from the 1990s. As a high school student in Waco, Texas, young Roy met Wynton Marsalis in 1987. Impressed with the young man's talent, Wynton encouraged Roy. In April, 1988, while still a teenager, Roy traveled to NYC and slept on the couch in Don Sickler's rehearsal studio in preparation for his recording debut in the big leagues with Don ("Superblue"). Before leaving New York on that trip he also recorded with alto saxophonist Bobby Watson ("No Question About It"). Read more...