A modal medium-up 3/4 song written for, and recorded by, organ legend Charles Earland. Condensed score and second parts are available for the two-horn arrangement, in which the harmony part is mostly above the melody.

A mellow modal song that really grooves in 3/4. Both the groove and the mode—G Dorian—are set up by a chordal and rhythmic ostinato that begins in the intro and extends through the A sections. This figure, which rises and falls between B♭ major, C major, and D minor triads over G in the bass, is shown in the intro for all lead sheets and parts.
The form is 64-measure AABC, with C the same as A, but all sections are actually eight-measure phrases repeated twice. The A section melody phrase is simple and lyrical while the bridge melody is more rhythmic, over chromatically descending dominant chords.

On the recording, the guitar and organ play the chord ostinato, taking turns or doubling the chords. However, it certainly works in lineups with only one chord instrument, or with guitar and piano.

About the arrangement: We have second parts and a Concert Condensed Score for the quintet arrangement. The horns play unison on the first A section, and the second A adds a harmony part a third above (ending on a fourth in the last note). The harmony part on the bridge alternates between two measures each of thirds above and mostly sixths below. The second part (tenor sax on the recording) has all the harmony notes, whether they're above or below the melody. Our trombone second part has the harmony notes written an octave lower to avoid having too many ledger lines, but trombonists can certainly play in the same octave as the other second parts.
This song's name comes from organist Charles Earland's epithet "The Mighty Burner." Eric Alexander's first recording, in 1991, was on Charles' album "Unforgettable"—like "Alexander The Great," it was recorded by Rudy Van Gelder at Van Gelder Studio in Englewood Cliffs, New Jersey. Also recorded at Van Gelder's was "Blowin' The Blues Away," earlier in 1997: Earland's first album to feature Jim Rotondi. Jim, Eric, and Charles appear together on a total of eight albums; "Alexander The Great" is the only one of these under Eric's leadership and Charles' only recording with guitarist Peter Bernstein and Joe Farnsworth. 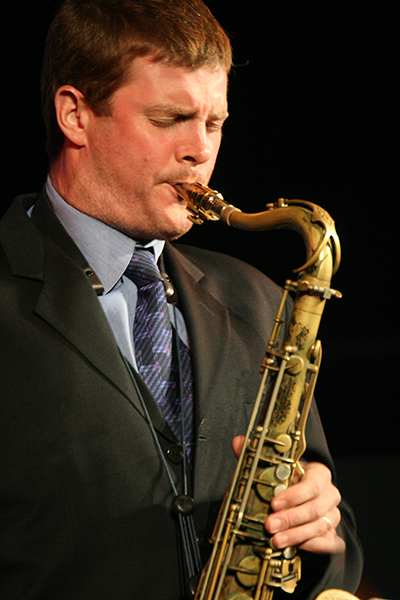