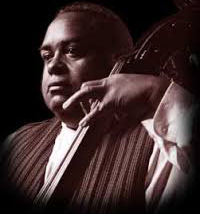 Ray Drummond is a bass player and educator with a prolific career. He is best known as a sideman and has appeared on over 300 albums, but he has eight albums as a leader under his belt and close to three decades of experience leading combos. Ray's musical life began at age eight when he took up the trumpet, but he switched to bass at 14. He attended Stanford Business School and worked in business while gigging on the side with musicians like Bobby Hutcherson and Tom Harrell. In 1977, he left the corporate world behind and moved to New York, where he worked with the biggest stars on the scene: Betty Carter, the Thad Jones/Mel Lewis Orchestra, Wynton Marsalis, Woody Shaw, Hank Jones, Jon Faddis, Milt Jackson, Johnny Griffin, Kenny Barron, Pharoah Sanders, and George Coleman.

Since then, he has recorded with legends like Art Farmer, Stan Getz, Kenny Burrell, Toots Thielemans, Benny Golson, and Ray Bryant, among many others. He holds a faculty position at The Julliard School.