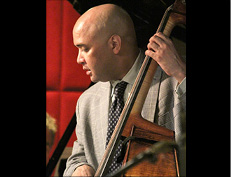 Peter Washington took up the bass at an early age. He became interested in jazz while at the University of California, Berkeley. He was a natural talent and began freelancing with the likes of vibist Bobby Hutcherson, tenor saxophonist Harold Land, vocalists Ernestine Anderson and Chris Conner. He joined Art Blakey and the Jazz Messengers in New York while freelancing in the NY area and worked his way up into becoming one of the first-call musicians on the New York scene. In the early 1990s, Peter joined the Tommy Flanagan Trio -- known to many as the "greatest trio in jazz" -- and played with them until Tommy's passing in 2002. Peter is also renowned for his work with Bill Charlap's trio along with drummer Kenny Washington.