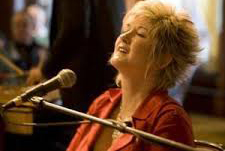 Dena DeRose is a tremendous pianist, vocalist, composer, and educator. Dena learned voice somewhat accidentally: as a student at Binghamton University, she practiced and played piano so rigorously that she was forced to abandon the instrument for two years, during which time she turned to singing instead. By the time she was able to play piano again, singing was an integral part of her musical identity, and when she moved to New York in 1991, her unique vocal style combined with her pianistic musicality made her a success.

Since then, she has recorded seven albums as leader. Her talents have earned her various positions in academia; she has worked within the SUNY system, Manhattan School of Music and the New School. She currently holds the position of head of the Jazz Vocal department at the University of Music and Dramatic Arts in Graz, Austria. In addition, she has taught at the Stanford Jazz Workshop for the past 15 years. She has worked with such names as Jay Clayton, Bill Henderson, Ingrid Jensen, the Ray Brown Trio, Clark Terry, Benny Golson, Mark Murphy, and Houston Person.