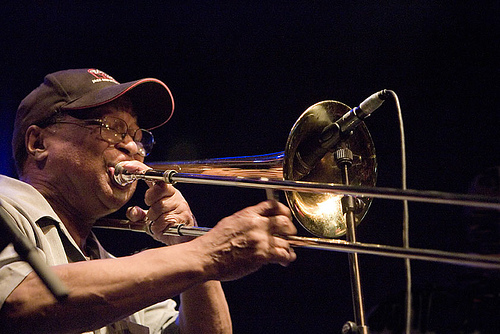 After J.J. Johnson, Curtis Fuller is likely the most influential modern trombonist. Born in Detroit and raised in an orphanage, he was a relatively late starter: he did not take up the trombone until 16. But it was not long until he was cutting his teeth with saxophonists in the area like Pepper Adams and Yusef Lateef and guitarist Kenny Burrell, eventually building up his skills enough to New York in 1957. Curtis' 1957 arrival in New York as a talented 22 year old trombonist is certainly an unimaginable success story.

On April 5th he recorded his first New York sessions with Yusef Lateef, and from there, his career took off, with dates every few days alongside stars like Paul Quinichette, Red Garland, Clifford Jordan, Sonny Clark, Lee Morgan, Jackie McLean, and even John Coltrane. In fact, it was only a matter of weeks, only May 11, 1957, that Curtis got his first leader date, “New Trombone,” with Prestige Records; one month later, he followed up with his first date as a leader for Blue Note (“The Opener”). In all, he had seven dates as a leader in his first year in New York alone, and 21 dates total—an unbelievable smash success.

Curtis went on in 1960 to become the first trombonist in the Art Farmer-Benny Golson Jazztet and shortly thereafter joined the Jazz Messengers, with whom he played until 1965. Simultaneously, he recorded albums as a leader for Warwick, Epic, and Impulse Records. In the later 1960s, he toured Europe with Dizzy Gillespie. The 1970s brought Curtis into a more experimental era during which he tried hard bop arrangements in a band that featured electronic instruments, but he returned to his roots in the later 70s and 80s playing with Art Blakey, Cedar Walton, and Benny Golson. In 2007, he was honored as a NEA Jazz Master. He continues to play and lead master clinics across the country to this day.