A simple, laid-back riff blues, one of Kirk's specialties.

This is a simple funky riff blues with a slightly more beboppish turnaround. On the recording Rahsaan plays the melody on flute; he articulates it slightly differently each time. The solos on the recording go to double-time feel after a few choruses; Rahsaan plays backgrounds behind the organ solo on tenor sax, manzello (soprano sax), and siren.
Most of Kirk's blues are in G or F. G is a good key for the flute, which he plays here; however it also happens to be good for what he is best known for, the three simultaneous saxophones. This is because C♯, the note on the saxophone whose fingering is open (all fingers up), transposes to B for the soprano and tenor, the third of G. Rahsaan would play three-part harmonies on G blues that had the tenor on the third so he only had to finger two of his three instruments. And because the alto transposes up a fourth from the tenor, on the IV chord he would switch to not having to finger the alto!

This song has subsequently been recorded several times, most recently by baritone saxophonist/flautist Claire Daly on her tribute album "Rah! Rah! Rahsaan!"

Email Send Funk Underneath to a friend 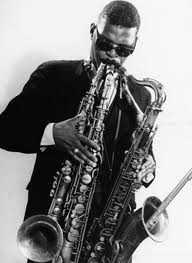