This composition certainly is "Crazy!" It's not an easy one to learn, but there's something irresistible about it. It will make a very impressive addition to any set. Lead sheets, second parts and C condensed score available. 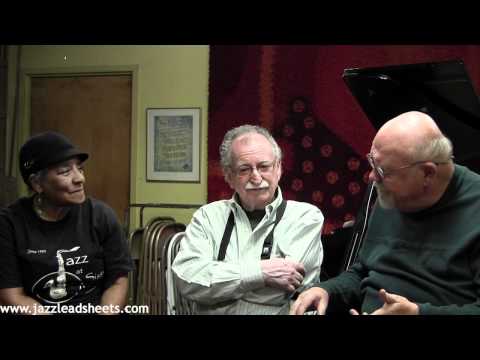 This one starts out "crazy," with a wild tutti intro (horns in octaves) which breaks into harmony during the melody. Second part editions are also available. This composition is also in the pretty "crazy" key of B-flat minor. The head is definitely challenging, but well worth the time it will take you to learn it. Our audio excerpt starts with the melody. There's an alternate audio take

from the same session also available.

Video: Bertha Hope, Jerry Dodgion, and Putter Smith talk about the great Elmo Hope. Elmo Hope was a classically trained pianist with technique rivaling that of his childhood friend Bud Powell and a composer of music whose inventiveness and complexity approaches that of Thelonious Monk. In fact, Elmo, Thelonious and Bud used to hang out so much together they became known as "The Three Musketeers."

Putter Smith has been an in demand bass player in Los Angeles since he was a teenager. He played with Elmo Hope for a six week residency in Los Angeles when he was 17 years old.
This is the first recording of Crazy. Elmo revisited it in a trio context in 1961 at the less "crazy" tempo of ca. 196. You can read more about this first session by checking out Elmo Hope's Chips.

More titles from this album are available. The original album cover shows Elmo sitting outside the rear door of Rudy Van Gelder's Hackensack studio, next to Rex, Van Gelder's dog.

Email Send Crazy to a friend