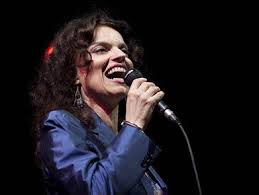 Roberta Gambarini is an Italian jazz singer. She was born in Turin, Italy, and started taking clarinet lessons at age twelve. She made her singing debut at age seventeen in jazz clubs around Northern Italy, then moved to Milan, where she worked in radio and television and began recording under her own name in 1986. In 1998, two weeks after arriving in the United States with a scholarship from the New England Conservatory of Music, she was awarded a third-place finish in the Thelonious Monk International Jazz Vocal Competition.

She left Boston for New York City to find work in jazz clubs. She got her big break in 2006 with the release of her album "Easy to Love," which caught the attention of jazz critics. Taking a classic modern jazz album by Dizzy Gillespie ("Sonny Side Up," Verve, 1957), she sang each of the three intricate solos by undisputed masters of the idiom (trumpeter Dizzy Gillespie and tenor saxophonists Sonny Stitt and Sonny Rollins) executing each in the original register of horn (including Rollins' lowest notes and Gillespie's stratospheric ones) with such command, accuracy and ease of execution that jazz's elder statesman, nonagenarian pianist Hank Jones was moved to publicly proclaim her the "best new jazz vocalist to come along in fifty years".