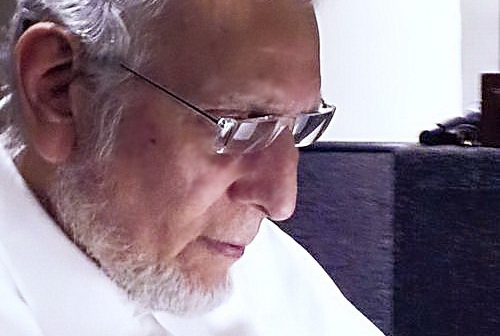 Marty Sheller, trumpet player, composer, arranger and record producer was born March 15,1940 in Newark, New Jersey. His first instrument was snare drum which he took up at age 10, studying with a neighborhood friend of his family, and even though he switched to trumpet a year later, his love of percussion has played a major role in his career.

In September of 1957, Sheller began college at Columbia University in New York City where he met fellow student and pianist Myron Schwartzman who introduced him to another student at the school, alto saxophonist Bobby Porcelli. They have all remained close friends since those days, when Sheller and Porcelli could be heard practicing Charlie Parker--Dizzy Gillespie unison lines in Marty's dorm room.

Sheller made his professional debut in 1958, playing a summer gig with Porcelli, Schwartzman, and drummer Wilbur Bailey at the Woodbine Hotel in the Catskill Mountains. As young adults, they were passionate about the emerging music of Miles Davis, Art Blakey, Horace Silver and John Coltrane, and that summer was spent transcribing and playing songs from their recordings. In the fall, Sheller joined a band led by tenor saxophonist Hugo Dickens that played at dances, fashion shows and cocktail sips sponsored by black social clubs in Harlem on Friday and Saturday nights. The clubs wanted a band that could play rhythm and blues as well as Latin, and there was a group of musicians in New York that had grown up listening to both kinds of music and knew how to play them authentically. There were three bands working that circuit; Hugo Dickens, Pucho, and Joe Panama. Many musicians who played in these bands went on to become very influential in the jazz and Latin--jazz scene, including drummers Pete "La Roca" Sims, Phil Newsum and Steve Berrios, pianists Rodgers Grant and Arthur Jenkins, bassists Bill Salter and Larry Gales, trombonist Barry Rogers, alto saxophonists Bobby Porcelli and Bobby Capers, and Hubert Laws who doubled on tenor sax, flute, guitar and vocals.

In 1959 Sheller began playing with composer, arranger, timbalero, vibraharpist and pianist Louie Ramirez. In 1960, Sheller and Ramirez put together a Latin--jazz band that played jazz songs with a Latin rhythm section, but the band found little work. The group included conguero Frankie Malabe, whom Sheller sites as an important early influence. Sheller spent many afternoons at Malabe's house on Simpson Street in The Bronx (across the street and a few doors down from the infamous police station nicknamed "Fort Apache") studying African and Afro-Cuban rhythms. Malabe would arrange two seats facing each other, put on a record, and demonstrate the conga parts by playing them on Sheller's knees, explaining the time-keeping patterns and their relationship to the clave. The Sheller/Ramirez band, finding few places that would hire them, discontinued rehearsals until conga player Sabu Martinez hired the entire group, minus Malabe, to play on "Sabu's Jazz Espagnole" (originally issued on Al Santiago's Alegre Label), considered by connoisseurs of Latin-jazz to be one of the genre's quintessential recordings.

Sheller was working with another timbalero-vibraharpist, Pete Terrace, when he first met Mongo Santamaria at a club in the Bronx in 1961. The Cuban conga great had recently come from San Francisco to New York with a charanga band. In November of 1962, Sheller got a call from Santamaria, who had dropped the flute-and-violins lineup of the charanga band in favor of a Latin-jazz sound with a frontline of trumpet, alto saxophone and tenor saxophone. Three days before Sheller began rehearsals, Mongo needed a piano player for a weekend gig in a Bronx club. Chick Corea had just left the band and Donald Byrd recommended a young pianist from Chicago. Byrd explained that the pianist had probably never played with a Latin band, but that he was a very good musician and wasn't working—it was Herbie Hancock. At the end of the gig, Byrd asked Hancock to play a song for Santamaria that Herbie had recently recorded and would fit with a rhythm he heard Santamaria's band play that weekend. The song was Watermelon Man, and Hancock brought the music to Mongo's next rehearsal (Sheller's first rehearsal with Santamaria). When the band first played the song in public, at The Blue Coronet in Brooklyn, the people went wild. Santamaria's manager phoned Orrin Keepnews at Riverside Records with the news and persuaded the producer to come out to the club (on Thanksgiving night 1962) to hear the reaction for himself. The next week, Keepnews recorded the song for release as a single. Issued on Riverside's Battle subsidiary, Hancock's Watermelon Man became a Top 10 hit. It features a trumpet solo by Sheller, not playing in his usual bop-imbued style but rather blowing simpler, funky lines inspired by Melvin Lastie's cornet solo on the Barbara George hit I Know.

Sheller played with Santamaria, as well as composed, arranged, and eventually served as musical director through 1967, when he put down his trumpet due to embouchure problems. He continued, however, working with Santamaria as an arranger, composer, conductor and friend until the conguero's death in 2003. Among Santamaria's four Grammy-nominated Latin-jazz recordings Sheller produced was the album "Dawn," which won a Grammy for Best Latin Recording of 1977.

Sheller's awareness of clave counterpoint, combined with a thorough grounding in hard bop, made him one of the most sought after New York arrangers. His jazz informed charts greatly contributed to the success of the salsa music issued by Fania Records from the late 60's through the late 80's. Along with Louie Ramirez and Luis Cruz Junior, he can be considered one of the architects of the Fania sound. Besides scoring the 1989 hit "El Gran Varon" and many other recordings and productions by Willie Colon, Sheller's arrangements can be heard on recordings by George Benson, Ruben Blades, David Byrne, Jon Faddis, The Fania All-Stars, Larry Harlow, Giovanni Hidalgo, Hector Lavoe, Arturo O'Farrill's Afro-Latin Jazz Orchestra, Manny Oquendo's Libre, Sabu Martinez, Ismael Miranda, T.S. Monk, Idris Muhammad, Luis "Perico" Ortiz, Charlie Palmieri, Louie Ramirez, Tito Puente's Latin-Jazz Ensemble, Mongo Santamaria, Shirley Scott, Woody Shaw, The Spanish Harlem Orchestra, Steve Turre and many others.

Sheller collaborated with Charlie Gerard on the book "Salsa - The Rhythm of Latin Music" and arranged a Clio Award-nominated Budweiser TV commercial featuring the singing of Jose Feliciano. He composed, arranged and produced the music for the PBS TV mini-series "Oye Willie" and did the same for the NBC TV (New York) Hispanic affairs program "Visiones." He has conducted workshops at Baruch College in New York City at The Milt Hinton Jazz Festival with Tito Puente's Latin-Jazz Ensemble and with Jerry Gonzales' Fort Apache Band. On October 1,2005 Sheller participated as a panelist in a conference at Harvard University coordinated by The Cultural Agents Initiative, The Smithsonian Institution and The Americas Society entitled "The Jewish Latin Mix; Making Salsa." That same evening, The Lincoln Center Afro-Latin Jazz Orchestra premiered his composition "Counter Punch" featuring Bobby Porcelli on alto sax. On July 24,2006 Sheller was the subject of an oral history interview collected by The National Museum of American History (a part of The Smithsonian Institute). The interview is a key objective of the Online Project For Latino Jazz Documentation and Education.

Sheller's long and busy career as a valued arranger-composer-producer left him little time to contemplate recording his own music. But he finally resolved to address that oversight at the urging of friends, organizing several sessions with nine of his favorite musicians. After nearly a half century as a key behind-the-scenes figure in Latin-jazz and salsa music, Sheller recorded "Why Deny," the critically acclaimed first recording to be issued under his own name, and then the follow-up album entitled "Libre." Marty has no plans of slowing down and continues to compose and arrange for a wide variety of artists, as well as for his own ensemble.

He was a guest artist fall semester 2017 at his alma mater, Columbia University in NYC. The CU bands featured his music in a concert at Symphony Space on December 9, 2017.

Marty continued to compose and arrange until his unexpected death in 2022.