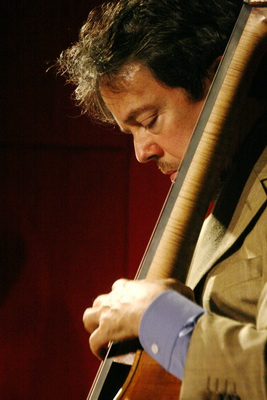 Renowned bassist Jon Burr is a mainstay in the New York scene. At the age of 16 Charles Mingus asked him to sit in on bass at the Village Vanguard and Jon has steadily risen in the jazz world since then. He has worked alongside many of the jazz giants while cultivating his own unique sound. His early discography shows us that he hit the ground running upon arrival in the Big Apple, and includes recordings with Buddy Rich and Chet Baker.

The many accomplishments under his belt include work with artists ranging from Buddy Rich and Hank Jones, to Eartha Kitt and Rita Moreno, even a five year tour with Tony Bennett and numerous Broadway credits. Although his performance record crosses many genres, his work as a jazz composer speaks for itself. His compositions have been performed by jazz giants like Chet Baker and Stan Getz on their own records.

He formed his original instrument quartet, the Jon Burr quartet, in 1991, and his CDs as a leader include "In My Own Words," "3 For All" and "Just Can't Wait," all featuring his original compositions. His current groups include The Jon Burr Band, The Jon Burr Trio, Jon & Lynn, Giant Cicada, and The John Burr Big Band.