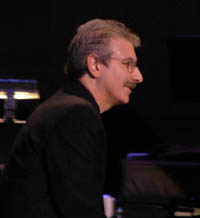 Having started his career as a pianist, arranger, and composer for Woody Herman and his Thundering Herd, Oddo met vocalist Rosemary Clooney in 1983 and served as her music director, pianist, and arranger for more than 18 years. His credits include work on 20 of her recordings, as well as countless live and televised performances.

Other projects include composer and performer for PBS/Showtime’s Our Town, directed by James Naughton and starring Paul Newman, and conductor, pianist, and arranger for the NBC special Scott Hamilton & Friends. He has also performed at the White House for four of the last five presidents.

A master’s graduate of the Eastman School of Music, John Oddo is a musician with tremendous versatility.

Early in his career, John worked with Don Sickler in transcribing Tadd Dameron's music for Philly Joe Jones and Dameronia.