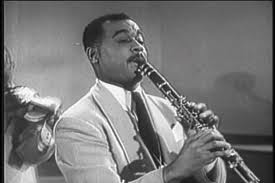 Jimmy Hamilton was born in Dillon, South Carolina, but grew up in Philadelphia, PA. At age seven he started studying trombone, then piano and then trumpet. In 1935, as a trumpet player, he became section mates with two other trumpet players, Dizzy Gillespie and Charlie Shavers, in the Frank Fairfax Orchestra.

In 1939, now playing tenor sax and clarinet, Jimmy joined Lucky Millinder and did his first recording, with Jimmy Mundy. He was with the Teddy Wilson Orchestra from 1939-41, but also recorded with Billie Holiday in 1940. From 1941-42, he was with the Benny Carter sextet. In 1943 he replaced Barney Bigard in the Duke Ellington orchestra, and he stayed with Ellington until 1968. He also found time to do some of his own recordings. After leaving Ellington, he freelanced before spending the 1970s and 1980s in the Virgin Islands teaching music. After retiring from teaching, he continued to perform with his own groups from 1989 to 1990.