A great feature for drums, this head gives you a fantastic opportunity to show off your improvisation chops over the changes to Charlie Parker's classic Confirmation. 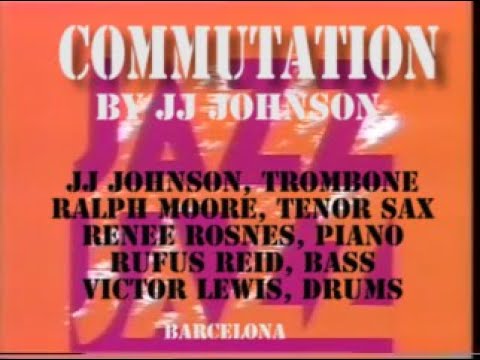 This head is a great twist on a jazz classic—Charlie Parker's Confirmation—that you can adapt in many ways. Start with our lead sheet, then see how you can play around with it to make it work for you! J.J himself experimented with form and style, maybe depending on which musicians were in his group. In his later touring groups, he would use Commutation as a feature for his drummer, sometimes leaving the bridge open for the drums.

J.J. first recorded Commutation on his 1957 quartet album "First Place." J.J. originally wrote his melody on the chord progression of the first four measures of Confirmation, Charlie Parker's chord progression to his classic composition. J.J.'s Commutation has evolved over the years, and his last version is described in the Description notes for the next album "Quintergy."

This first recording starts with pianist Tommy Flanagan soloing two choruses over Confirmation "changes." J.J. starts his three solo choruses by outlining his four- measure melody, then begins to solo. We have to wait until the last eight measures of the track to hear J.J. start the melody as he had written it, and this leads to the ending of the track. Our audio excerpt fades in and out of these two statements of J.J.'s theme.


J.J. started his Columbia Records period in 1955 as a co-leader with Kai Winding. The popular Jay & Kai combination had already recorded for the Savoy, Prestige and Bethlehem labels, and they continued on with four more for Columbia before J.J recorded Overdrive on his first quartet album for Columbia ("'J" is for Jazz"). This was followed by the "Jay Jay Johnson Quintet" album with J.J joined by flutist/tenor saxophonist Bobby Jaspar. The following "Dial J.J.5" sessions featured two Jaspar compositions, Cette Chose and In A Little Provincial Town. A little later in 1957 (April) came the "First Place" quartet session with Paul Chambers on bass.

You'll see that this composition took on some defining structural changes as it developed over the years, from J.J.'s 1957 album to this 1988 recording. Compare this audio clip with the audio clip from J.J.'s "First Place" album. The first four-measure section of the melody has now become the first four measures of each A section in this AABA chord progression. J.J. has also added a bridge melody. In his later touring groups, he would use Commutation as a feature for his drummer, sometimes leaving the bridge open for the drums.
What started in 1957 as a melody interjected over the rest of the group swinging on Confirmation changes became much more defined over the years, and in the 1988 "Quintergy" recording, the rhythm of the melody also defined the rhythmic figures for the rhythm section.

This performance captured here was J.J.'s return to public performance after the years he spent writing movie scores in Los Angeles. From Stanley Crouch's liner notes to the album: "This recording supplies entrancingly audible evidence of why the return to public performance of J.J. Johnson was one of the signal events of the last decade. Johnson had been living in Los Angeles since 1970 and doing more television writing than trombone playing, his eminent position in the technical history of the instrument relegated to memories and recordings done over twenty years since rising to recognition as the bebop innovations of the middle forties took off. The velocity, harmonic depth, and smoothness that characterized the best of the bebop movement were embraced so successfully by Johnson that he was able to add another reservoir of style to a trombonist's artistic options. It was that level of accomplishment which inspired such anticipation when it was announced that Johnson would be coming to New York's Village Vanguard, playing New York again, where he had been so consistently victorious during his youth."

J.J. Johnson is arguably the most influential bop and post-swing trombonist and also one of the great composers and arrangers in jazz. He was one of the first trombonists to embrace bebop; his playing continues to exert a strong influence on other musicians. He started his recording career in 1942 in Benny Carter's big band. On July 2, 1944, J.J was on the first Jazz At The Philharmonic concert. He recorded with the Count Basie Orchestra beginning in 1945. Read more...