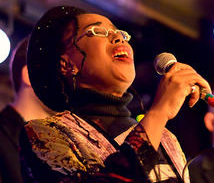 "I take a song and work it in my own way. I love the challenge of a musical moment, the immediacy of it," says Ms. Brown. She grew up in St. Louis and started performing at an early age. She worked in classical music but grew into the jazz scene in Cleveland with the help of drummer.bandleader Bob McKee. From there, she performed with such artists as Ellis Marsalis, Billy Taylor, Dizzy Gillespie and Joe Lovano.

Her collaboration with composer/pianist Milton Sealey in 2000, in which she sang several of Milton's compositions, was very fortunately timed, as Milton died soon after.

In addition to performing and touring, Jeri also teaches in Canada.