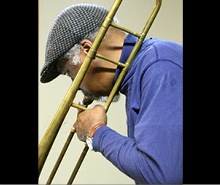 Grachan Moncur has been one of the leading jazz trombonists throughout the past fifty years. He has played with jazz legends, including Ray Charles, Wayne Shorter, Blue Mitchell and Jackie McLean. Moncur was born in New York City, first learning the cello at the age of nine. Inspired by his father, bassist Grachan Moncur II, who played with the likes of the Savoy Sultans, Billie Holiday and Dinah Washington, he turned to the trombone at the age of eleven. He began attending the Laurinburg Institute harnessing his skills and attending shows where he sat in with musicians like drummer Art Blakey and alto saxophonist Jackie McLean.

While studying at the Manhattan School of Music and Julliard, he began performing as a leader with greats including Wayne Shorter, Gary Bartz and Blue Mitchell. He took part in two classic Jackie McLean albums "One Step Beyond and "Destination Out" contributing multiple compositions. He recorded two albums as a leader for Blue Note: "Evolution" with McLean and Lee Morgan and "Some Other Stuff" with Herbie Hancock and Wayne Shorter.

As one of the first trombonists to explore free jazz, he began touring and recording with Archie Shepp, Marion Brown, and Joe Henderson. He also was part of the cooperative band 360 Degree Music Experience with Beaver Harris. He played a stint with Sonny Rollins in Chicago and New York City. In 1974, the Jazz Composer's Orchestra commissioned him to write Echoes of Prayer, a jazz symphony featuring a full orchestra. He was composer in residence at the Newark Community School of the Arts. Moncur continues to compose, play and record today.