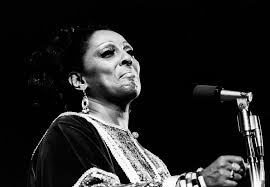 Vocalist Carmen McRae was a singer best-known for her delivery of lyrics and her sensitive interpretation of ballads. Her unique behind-the-beat phrasing and trumpet-like clarity earned her the moniker "The Singer's Singer." Her career spanned 50 years and included over 60 releases—over which her style remained remarkably consistent—and many critics consider her to be as talented as the iconic vocalists Ella Fitzgerald, Sarah Vaughan, and Carmen's primary inspiration, Billie Holiday.

Carmen’s career began as a songwriter: one of her early songs, Dream Of Life, was recorded by Billie Holiday in 1939. During Carmen's late teens and early twenties, she worked as an intermission pianist and singer at Minton's Playhouse. In 1953, she caught the attention of Decca's Milt Gabler and began a five-year collaboration that yielded twelve albums and brought her to the attention of the jazz world; a year later, she was named "Best New Female Vocalist" by Down Beat Magazine. Throughout her career, Carmen toured constantly. Some of her most famous appearances included the Monterey Jazz Festival, the North Sea Jazz Festival (alongside Duke Ellington), and the Montreux Jazz Festival. Carmen also took on many notable album projects, including collaborations with Noel Coward and Sammy Davis Jr; an album of live duets with Betty Carter; and her final album, a tribute to Thelonious Monk. Because of her early relationship with Billie Holiday and Billie's strong influence on Carmen's work, Carmen always included one of Billie's songs in her repertoire and went on to record an album dedicated to Billie entitled "For Lady Day," released posthumously in 1995.