This bebop line based on the changes of How High The Moon predated Charlie Parker's similar exploration. Chuck's introduction is notated in all lead sheet editions. 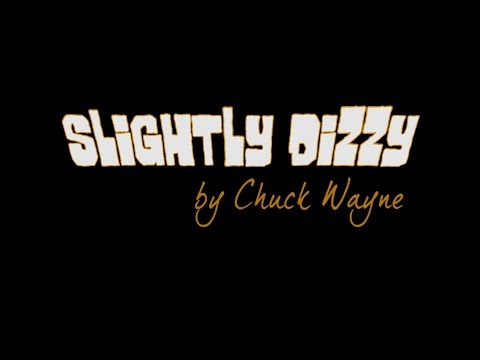 Writing a new composition based on the chord progression of a "standard" was becoming common among the new beboppers of the mid-1940s. Slightly Dizzy is based on the chord changes of How High The Moon. Our audio excerpt starts with Wayne's written-out introduction, which is also indicated on the lead sheets. Chuck wrote and recorded this composition prior to Charlie Parker's own famous melodic excursion on these chords, Ornithology, which was first recorded in 1946.
Nine months prior to this recording, Chuck Wayne, still only twenty-one years of age, was on the first recording of Dizzy Gillespie's classic composition Groovin' High, as a member of the Dizzy Gillespie Sextet, on February 8, 1945. This was also Dexter Gordon's first session under Dizzy's leadership. Chuck had already recorded with Dizzy on a Sarah Vaughan session on New Year's Eve, 1944, and on January 12, 1945, when they were both part of the Joe Marsala Sextet. Chuck first recorded with Joe Marsala on November 29, 1944. The bebop era was just getting started, and Chuck was right there playing and hanging out on 52nd Street, and working and recording with all the legendary bebop players, including, of course, Charlie Parker.
Playing smooth, articulate bebop lines on the guitar requires sound coordination between the picking hand and the fingering hand. Given his reputation as one of the first guitarists to translate the bebop language onto the instrument, Chuck Wayne's music is a natural starting place for developing this facility. Our lead sheet of Slightly Dizzy will help intermediate guitarists internalize bebop phrasing, articulation and melodies.

If conquering the velocity of this challenging melody presents an issue, our video with guitarist Joe Freund will provide you with techniques for overcoming such a difficulty. Featuring a clear and close-up view of the instrument as well as the sound of both Freund and the original recording, this demonstration of a potential practice routine for the melody illustrates both the process and result of an effective approach to practicing.

Born Charles Jagelka, New Yorker Chuck Wayne was a jazz guitarist, composer and arranger noted for distinctive bebop style and legato technique. He became an expert in the banjo, mandolin and balalaika as a child, focusing on swing. He was heavily influenced by classical music in addition to jazz. He became prominent in the early 1940s on NYC's 52nd Street and in Greenwich Village where he made the transition to bebop. Influenced by Oscar Moore and Charlie Christian, and horn players of the day like Coleman Hawkins and Charlie Parker, Chuck made his way into Woody Herman's big band and later worked with trumpeter Dizzy Gillespie, spreading the bebop revolution with recordings like Groovin' High and Blue 'n' Boogie. Read more...