Later For You – Elmo Hope

A spirited tour de force that makes a fantastic technical workout. Based on the changes of All God's Chillun Got Rhythm.

Purchase Later For You - Elmo Hope 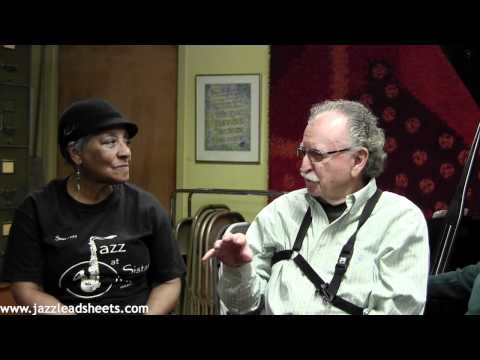 The audio excerpt starts with Elmo's clever rhythm section introduction. It's notated in the C treble clef lead sheet. Elmo's melody is in the key of A-flat concert, and it's an energetic tour de force based on the "changes" of the 1937 American standard All God's Chillun Got Rhythm. The B-flat lead sheet is written in the tenor sax register.

On Elmo's recording, the melody was recorded by tenor and piano alone, except for the last four measures of the out chorus, when the trumpet enters.

Don Sickler: "For me, as a trumpet player, this head is a great technical etude (I play it down an octave from the written lead sheet). It goes out of the trumpet range only in the measure before D, so I play that measure (with pick up) up an octave as written. As a technical exercise, I like to read through the other versions. The E-flat lead sheet head thus becomes an etude for trumpet in the key of F, and the C treble clef lead sheet (again 8vb) is an etude in the key of A-flat."

Elmo Hope was a classically trained pianist with technique rivaling that of his childhood friend Bud Powell and a composer of music whose inventiveness and complexity approaches that of Thelonious Monk. In fact, Elmo, Thelonious and Bud used to hang out so much together they became known as "The Three Musketeers."

Putter Smith has been an in demand bass player in Los Angeles since he was a teenager. He played with Elmo Hope for a six week residency in Los Angeles when he was 17 years old.
Check out all the Elmo Hope compositions from his 1954 quintet session for Blue Note "Elmo Hope Trio And Quintet" available on jazzleadsheets.com.

Email Send Later For You to a friend