Flute, vibes and piano trade twos after the lightning-fast unison melody on this recording, but any musician will find Flute Bob an exciting challenge! I'll Remember April changes. 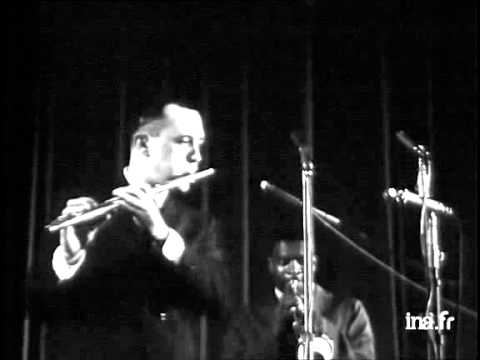 This is Bobby's clever soloist tour de force over I'll Remember April changes. Our excerpt starts at the top of the track with the rhythm section introduction which is notated in the C treble clef lead sheet. After the flute and vibes come in with the unison melody, the flute, vibes and piano trade twos until the next melody section.

From the album title, you would expect to find Herbie Mann on this track, but that's not the case. This was the first session for the album, and it is really a Bobby Jaspar session. They recorded three arrangements. Nine days later, Bobby was joined by Herbie Mann for another session which finished up the "Flute Flight" recording.

1957 was a busy year for Bobby, starting with a recording with J.J. Johnson, on "Dial J. J. 5" (January 29 and 31). The group's February performance at the Cafe Bohemia was recorded and is also now released. On March 5 and 7 he recorded with Andre Hodeir for Savoy Records. The day after "Flute Flight's" second session, on March 22, Bobby recorded again for Prestige, this time on tenor sax, also with John Coltrane for the album "Interplay for Two Trumpets and Two Tenors."

In May, the final "Dial J. J. 5" session took place, followed by a Milt Jackson session, then two of Bobby's own sessions for Riverside Records. For June through September, Bobby was in Europe, doing some more of his own recording there. In October, he came back to the US to do two weeks at Birdland in NYC with the Miles Davis Quintet (October 17 - 30). He also fit in a session behind singer Tony Bennett on October 25. 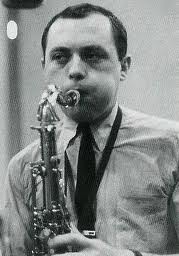 Heralded as one of the handful of Europeans who created their own niche in the straight-ahead jazz age, cool jazz and hard bop saxophonist, flautist and composer Bobby Jaspar was born in Liège, Belgium to a family of musicians. As a teenager, Bobby played tenor in a Dixieland group with Toots Thielemans. After relocating to Paris in 1950, he recorded with Henri Renaud and Bernard Peiffer and began playing with touring Americans Jimmy Raney, Chet Baker and future wife Blossom Dearie. Blossom and Bobby moved to New York in 1956 where he was heralded the New Star due to his distinct phrasing and sound. Read more...