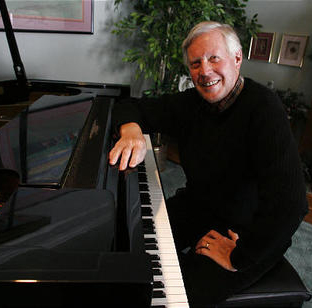 Larry Jackstien is a Salt Lake City-based marketer, jazz promoter and pianist as well as co-lyricist with Kenny Burrell for the lyric version of Kenny Dorham's Blue Bossa, It's No Time To Be Blue. He describes himself as a "jazzy businessman" and a "jazz fanatic" who first fell in love with the genre in junior high school. Although he considered a professional career, he instead pursued an MBA in marketing. He has used his positions as a marketer in the hotel industry as a means to produce jazz concerts and festivals.

He produced a successful series of concerts at the Hotel Utah during the 1970s and 1980s, founded the Jazz at the Sheraton series, and organized and promoted the Snowbird Jazz & Blues Festival. He has also maintained a performing career and has accompanied stars like Milt Jackson, Kenny Burrell, Stanley Turrentine, Roy Hargrove, Clark Terry, Nancy Wilson, Henry Mancini, Mel Torme, and even Elvis Presley as they all have come through Salt Lake City. He has recorded one album as a leader and gives lectures on jazz to the Salt Lake City community. He continues to perform with his trio today.