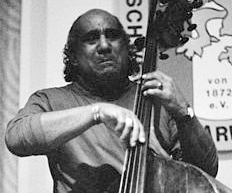 Walter Booker, from Washington D.C., experimented first with the clarinet and alto sax, and didn't begin playing the bass until he joined the the U.S. Army band in 1959. After his discharge, Booker moved to New York City and began working immediately with the great trumpeter Donald Byrd. Walter quickly worked up the ranks and became a highly sought after musician, working and recording with greats such as Stan Getz, Sonny Rollins and pianist Ray Bryant. However, Booker's most significant relationship in music came when he joined Cannonball Adderley's Quintet in 1969. This version of the quintet helped lead the advent of "soul jazz" and gave Booker even more visibility, for they toured nonstop and released no less than eight albums between 1969-1975.

Booker then moved on to working with vocal icons Sarah Vaughan and Betty Carter, as well as opening his own Boogie Woogie Studio in NYC. Walter was able to combine advanced technical precision and efficiency with an open, peaceful spirit. He exemplified the feeling of jazz in both his playing and the atmosphere on stage. As also noted by his third wife Bertha Hope, "He was a 'dancing' bass player . . . It was like he and the bass had this connection." Booker was able to create such a profound feeling through his music that both the performers and audience members were infectiously inclined to keep moving and dancing. This is the essence of jazz, and Walter Booker was able to give a wonderful example of the spirit needed to master this music.