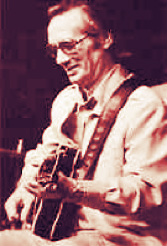 Remo Palmier may not be jazz’s most well known guitarist, but his resume speaks for itself. During the 1940s, Palmier worked with Coleman Hawkins, Charlie Parker, Dizzy Gillespie, Teddy Wilson, Billie Holiday and Sarah Vaughan—the few available recordings from this era showcase Palmier’s bebop-influenced style.

In 1945, he began a twenty-seven year collaboration with Arthur Godfrey on his CBS radio show. In 1952, Palmier officially changed his name from “Palmieri” in order to avoid being confused with pianist Eddie Palmieri. The late 1970s saw a resurgence in Palmier’s career; in 1977 he recorded Windflower with fellow guitarist Herb Ellis and in 1979 he released his only album as a leader, "Remo Palmier."