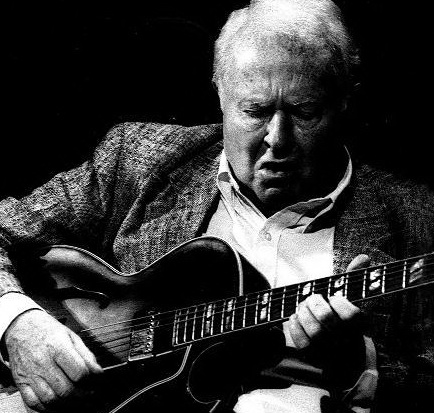 Herb Ellis was widely known for his blues-inflected soloing and masterful rhythm playing, most famously alongside Ray Brown in Oscar Peterson’s trio. Guitarist Jim Hall revered him for his “fantastic fire and drive.” Born in Farmersville, Texas, in 1921, he played banjo and harmonica before learning the guitar and studying at North Texas State Teachers College—currently known as the University of North Texas.

In 1947, Ellis, along with pianist Lou Carter and bassist Johnny Frigo, formed the Soft Winds, whose composition Detour Ahead has since become a jazz standard. In addition to working with the Oscar Peterson Trio in the 1950s, Ellis performed and recorded with Ella Fitzgerald, Billie Holiday, Dizzy Gillespie, Louis Armstrong and more. Before forming the group the Great Guitars with Barney Kessel and Charlie Byrd in 1973, Ellis had a successful career as a session guitarist in the 1960s.