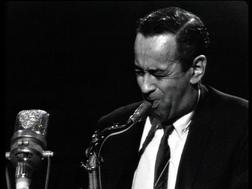 A unique and very individual tenor saxophonist, Paul Gonsalves was born in Boston, MA, and raised in Pawtucket, R.I. Back in Boston, he was featured with the Sabby Lewis band, and after Army service (1942-1945) he made his first recording with Sabby Lewis in March 1946. Later that year he joined the Count Basie band, replacing Illinois Jacquet. He made his first official recording with Basie on January 3, 1947. He remained with Basie into 1949, then joined Dizzy Gillespie's bop-oriented big band later that year, recording with them on November 21, 1949, and January 9, 1950.

On November 20, 1950, he did his first recording as a member of the Duke Ellington Orchestra, where he filled the chair formerly held by Ben Webster. In his long tenure with Ellington, Gonsalves' electrifying 27-chorus improvisation on Ellington's Diminuendo and Crescendo in Blue at the Newport Jazz Festival in 1956 marked his breakthrough to public fame and the beginning of a comeback for the Ellington band. See another performance of that title, in Holland, with Paul Gonsalves, on the Jazz Icons DVD Duke Ellington Live in '58. Gonsalves remained with Ellington through the rest of his life, but he did get a chance to record a few sessions under his own name.