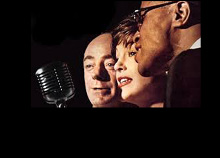 Lambert, Hendricks & Ross was a popular bop-influenced vocalese trio formed by Dave Lambert, Al Cohn, Zoot Sims, Stan Getz, and Woody Herman with lyrics by Hendricks. Their records took off once they hired Annie Ross to coach a choir of studio vocalists for their album of the music of Count Basie. The group decided to change gears and multi-track the parts in lieu of the chorus. "Sing A Song Of Basie" became the newly formed trio's first album and a smash success. In 1959, the trio abandoned multi-tracking and hired a rhythm section, which earned even more accolades. Annie Ross left the group in 1962; she was replaced by Yolande Bavan, who recorded with Lambert & Hendricks for two years. The group disbanded in 1964. To this day, their recordings are regarded among the very best in vocal jazz.