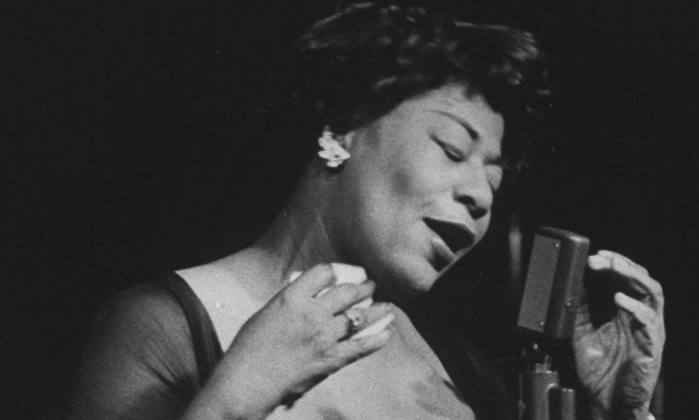 Perhaps the best known female vocalist in jazz, Ella Fitzgerald was hailed as the "First Lady Of Song." Her pure tone, clear diction and horn-like improvisational ability earned her the respect of musicians and the general public, launching her to great fame. Her interpretation of the American Songbook is the means for which many musicians and vocalists learn standards, making Ella one of the most influential jazz artists of all time.

Ella's career began after winning an amateur competition at the Apollo Theater in Harlem in 1934. Chuck Webb hired her in 1935 to sing with his band (albeit reluctantly—although she quickly won him over); after his death in 1939, Ella fronted the band and recorded over 150 songs with them. In 1938, she had her first number one hit with A-Tisket, A-Tasket. She began her solo career in 1942 on Decca with Milt Gabler as her manager and later Norman Granz. As bebop grew in prominence, Ella incorporated more scat singing into her style. Although Louis Armstrong had pioneered scat, Ella had the greater critical and popular success with scat with Flying Home (1945) and Oh, Lady Be Good! (1947).

In 1955, Norman Granz created the Verve label around Ella. On Verve, Ella released her American Songbook recordings, including her renditions of Duke Ellington's work (on which she collaborated with Duke himself). She also collaborated with Count Basie, Louis Armstrong, Antonio Carlos Jobim and Frank Sinatra in the 1950s and 1960s. In all, Ella recorded over 200 albums, won 13 Grammy awards, the NAACP Image Award for Lifetime Achievement and the Presidential Medal of Freedom.