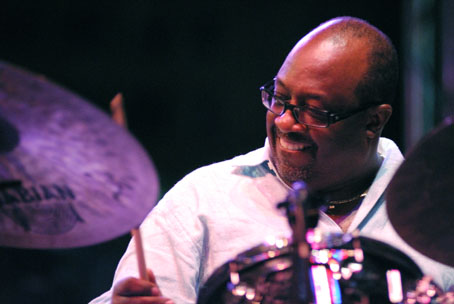 A leader in jazz drumming, drummer Carl Allen has been a force in the New York scene since the 1980s. Carl became interested in jazz after hearing an LP of Benny Carter as a teen. In his hometown of Milwaukee, Carl worked with Sonny Stitt and James Moody early in his career. He moved to the east coast to study at William Patterson College; a year before his graduation, Carl worked with Freddie Hubbard, for whom he served as music director for the next eight years. Over the course of his career, Carl has recorded on over 200 sessions as a sideman including dates with Donald Byrd, Art Farmer and Jackie McLean. He has performed with a who's who of jazz legends, including J.J. Johnson, Herbie Hancock, Wayne Shorter, Benny Golson, Joe Henderson, and many others.

Carl released his first album as a leader, "Piccadilly Square," in 1989. He has released four albums since then. He has also worked as a producer at his own label, Big Apple Productions, co-founded with Vincent Herring in 1988; he has produced for Eric Reed, Dewey Redman, Pharoah Sanders, Freddie Hubbard, Lage Lund, and others—70 credits in all. He founded the New York Jazz Symposium, where he leads workshops on jazz. He served on the faculty of Julliard from 2001-2013 and became the Artistic Director for Jazz Studies in 2008. He appeared as himself on the HBO series Treme in 2011. His latest project is a quintet, "The Art Of Elvin," founded as a tribute to Art Blakey and Elvin Jones.