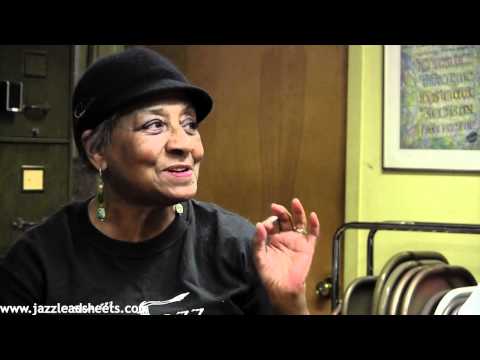 This composition really shows off the genius of Elmo Hope as a composer. The melody is embellished with an unusual and delightfully dissonant counterline in the quintet arrangement (see the second part editions or the condensed score for both parts at once). If you'd prefer to work out your own arrangement (or play the piece solo), we also have lead sheets for C, B-flat, E-flat and bass clef instruments that have Elmo's original melody and the chord progression for soloing. The minor melody is both lyrical and bouncy—the sort of tuneful piece that inspires humming along and toe-tapping.

Pianists, if you're playing solo or want to make your own arrangement, we offer the standard lead sheet with just the melody and changes. This is also great for vibes or guitar.

Video: Bertha Hope, Jerry Dodgion, and Putter Smith talk about the great Elmo Hope. Elmo Hope was a classically trained pianist with technique rivaling that of his childhood friend Bud Powell and a composer of music whose inventiveness and complexity approaches that of Thelonious Monk. In fact, Elmo, Thelonious and Bud used to hang out so much together they became known as "The Three Musketeers."

Putter Smith has been an in demand bass player in Los Angeles since he was a teenager. He played with Elmo Hope for a six week residency in Los Angeles when he was 17 years old.

This composition was likely named after Art Blakey's Muslim name, Abdullah Buhaina. The Blakey solo that kicks off this recording sets up the classic high-energy style for which Blakey was renowned. Elmo later recorded this piece as a trio with Paul Chambers and Philly Joe Jones; that version (released in 1961 on "Here's Hope" [Celebrity LB209]) has a laid-back swing feel—a casual shuffle in comparison to the earlier recording's out-of-breath explosion of energy. The fact that the composition works just as well in these two moods is a testament to Elmo's talents.

Check out some of the other Elmo Hope titles on "Elmo Hope Trio and Quintet", originally issued as a 10" LP, "New Faces, New Sounds, vol.2."

Email Send Abdullah to a friend