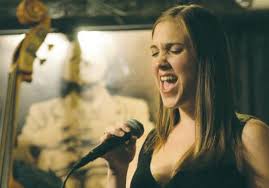 Israeli-born jazz vocalist Yaala Ballin has earned the attention of critics and listeners alike for her clear sound and improvisational style. Since moving to New York in 2004, Yaala has performed regularly at local venues like Smalls, Smoke, and Birdland as well as abroad at the International Jazz Festival in Tel Aviv. Her first album, “Travelin’ Alone,” was released in 2009 on Smalls Records; she followed up with 2011’s “On The Road” which received significant critical praise for its “class, confidence, and sophistication” (All About Jazz). She frequently leads masterclasses in New York, Europe, and Israel, and is an instructor in a US State Department “Jazz Futures” program in Cyprus. She serves on the faculty of the City College of New York.