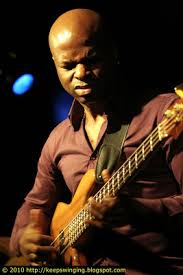 Known for his combination of solidity and versatility, Richie Goods has had a wonderful career in music. Hailing from the great music city of Pittsburgh, Goods went on to study at the Berklee College of Music and then onward to private study with none other than Ray Brown and Ron Carter.

His meaty sound and focused listening enabled Goods to work for many years in the bands of late piano master Mulgrew Miller, as well altoist Vincent Herring and drum king Louis Hayes. He has also participated on a variety of recordings with contemporary jazz greats, including Vanessa Rubin, Don Braden, Russell Malone and Anthony Wonsey.

Interestingly enough, Richie has also been a highly sought-after electric bassist in popular settings, recording with icons such as Alicia Keys, Whitney Houston and Common.