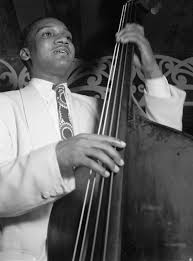 Oscar Pettiford's mother was Choctaw and his father was half Cheokee and half African American, making for an interestingly rich musical background. He grew up singing and playing piano in a family band before eventually switching to the bass at the age of 14. Pettiford was strongly influenced by the great Milt Hinton who helped convince Pettiford that if he continued to pursue music, he would make a successful career from it. Performing with Dizzy Gillespie helped Pettiford become recognized as one of the first bassists in the bebop world.

After making his mark working with Ben Webster and Coleman Hawkins, Pettiford relocated to Los Angeles where he recorded briefly in the movie industry before joining Duke Ellington's orchestra from 1945-1948. After breaking his arm, Pettiford experiemented with playing the cello, on which he also recorded.